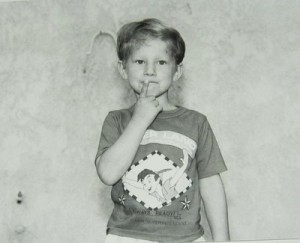 Who do you know with Wasn’t-me-I-didn’t-do-it-itis?

“It is not only what we do,
but also what we do not do,
for which we are accountable.”
-Moliere

When my son Bryce was in second grade, they had a Christmas Bazaar at his school. I sent him with $20 and a two-sided list of all the family members for whom he needed to buy Christmas gifts. Bryce came home with a little something for his sisters, an aunt, one of two Grandmas…and a whole bunch of little army men, dinosaurs, zoo animals, books on dragons, glow-in-the-dark play dough, an airplane kit. Hmm I thought.

Evidently Bryce forgot to turn the list over so he thought he had a whole bunch of extra dollars and put them to use. He’s a quick kid and I saw his mind spinning as he realized what happened. He told me the dinosaurs were for Grandpa and Dad, I think the dragon book might have been for his other Grandma, the lovely white tiger was clearly meant for me.

My kids often tease me with the Mom-ism I used in this instance, “you’re better than that.” It was my go-to phrase that I used as they grew to teach them what might be a better choice for next time.

Personal Accountability is a tricky trait. It’s hard for us to be strong enough to say I’m sorry. I didn’t mean that. How can I fix this? We somehow have our wires crossed that to accept responsibility or blame means we are weak. In reality, it’s the opposite.

To be personally accountable can be difficult for the best of us, but it will help you develop a mature character which others respect and trust. When you admit to your occasional mindlessness you are viewed as more human and relatable. I think it’s a part of Emotional Intelligence because you develop better personal relationships and feel better about who you are.

Everyone likes those people in the office who know how to get things done, stay on schedule, motivate others to do the same, and bring a positive frame of mind to work. None of that would be possible without personal responsibility and accountability.

It was an innocent mistake and Bryce did get to keep some of the items he bought that day. It ended up as a great lesson for him about thinking beyond himself and he’s a very thoughtful gift-giver today as an amazing, still quick and successful young adult.

In fact, I just received a beautiful Mother’s Day bouquet from him.

Oh, and I still have that sweet white tiger that my son gave me for Christmas when he was in the second grade.

Know someone else that would like this article? Sharing is caring!